Paragliding uses only the wind and gravity to fly and land. Paramotoring, however, uses a motor to accomplish these things. That is the major difference between the two disciplines. With this difference, what feature makes each sport safe or unsafe? Some common hazards of the two are getting caught in power lines if you fly too low. Another is running out of landing options if you are too far out in the water or flying over trees. Lastly, a midair collision with another glider, an ultralight, or an airplane. Paragliding only has the wings to fly and depends on the wind or thermals to keep it aloft. A drop in the wind or if thermal activity stops can cause the wing to collapse and bring the rider down with it.

What Is the Difference Between Paragliding and Paramotoring?

What Is Safer – Paragliding or Paramotoring?

Launching a paramotor without any wind is possible, while you need a robust wind to launch a paraglider. If the wind doesn’t hold up when you launch with a paraglider, you can get in trouble really fast. Paramotors are not dependent on the wind, so this hazard is eliminated.

The wing is also less prone to collapsing with paramotors due to its steady forward momentum. While with the paraglider, you are dependent on the wind. However, these are not reasons for complacency when flying with a paramotor. If you are launching and flying in strong wind, the degree of danger is the same for both paraglider and paramotor.

Highlighted below are the similarities and the differences between these two exciting sports. You can decide which one is for you.

What Is the Difference Between a Paramotor and a Paraglider?

A paramotor can stay aloft for about 3.5 hours on a full tank of gas on a calm day. A paraglider has to rely on a consistent wind to stay in flight. Without the right wind conditions, a paraglider cannot fly at all.

Paragliders have to take off from hills and glide down to their landing site. Paramotors can take off from any flat surface free of obstructions. Since they do not depend on the whims of the wind, they can land back from where they started. Doing this saves the rider from a long walk back to their starting point.

Are Paraglider and Paramotor Wings the Same?

No, they are not the same. The wings for paramotoring and paragliding may look similar, but there are a few critical differences.

For example, paragliding wings do not typically have trimmers. Extra lines are used to pull in the wing tips if you want to go faster. However, activating trimmers on a paragliding wing may induce violent whipping motions in the air, which a novice may find hard to control.

Using trimmers in paramotoring will be less risky. The trimmers can also increase the weight the wing can carry, which is important since the paramotor wing must carry the motor and the pilot as well.

There are other imperceptible differences between the two types of wings. The position of the wings relative to the pilot is also a little different to take into account the different weight distribution.

Can I Use a Paraglider Wing for Paramotor?

The short and sweet answer is a definite maybe. The paragliding wing is designed to carry only the pilot, while the paramotor wing is supposed to carry the motor as well.

When a paragliding wing is forced to fly a pilot and the motor, accidents could occur. The weight distribution and the position of the wing relative to the rider will be altered. This could cause problems, especially if the pilot is inexperienced.

However, experienced pilots have used the paraglider wing for paramotoring. Though they wouldn’t recommend it unless you know what you are doing. It’s definitely not for everybody.

It’s infinitely better to use the paragliding wing for its main purpose, which is paragliding. This will keep you out of trouble, and you get to enjoy the sport more.

Can I Use a Paramotor Wing for Paragliding?

Actually, you can (unsatisfyingly) use a paramotor wing for paragliding. But you may not enjoy it as much as using the wing designed for that particular sport. Moreover, the wings will not do an excellent job at each other’s sport. They are designed to do different things, and it’s better not to use one for the other if you can avoid it.

Without getting too technical, let’s say that paraglider wings are not that suitable for paramotoring. Paramotoring wings are not suited for free flight. Their wing profiles are different as they are asked to do different things.

Hybrid or universal wings are supposed to be suitable for both, but they cannot do both proficiently, a case of a jack-of-all-trades but master of none. If you can afford it, it’s better to get one of each wing. You get a better flight, and it will keep you safer as well.

Which Is Better – Paragliding or Paramotoring?

After all the discussions above, here are the pros and cons of paragliding and paramotoring. Ultimately, your safety will depend on your own vigilance. You cannot be complacent even in what you assume is picture-perfect weather. A sudden gust of wind can throw your day in disarray. So be alert and aware of your surroundings, and may your wings always be full of air. 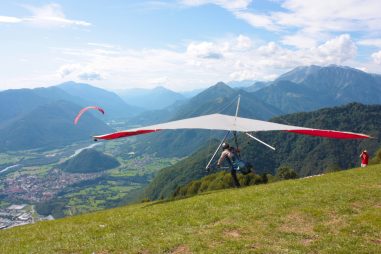