Paragliding and hang gliding offers varying recreational experience. So, choosing one depends on your preference when it comes to accessibility, comfort, convenience, and safety. For example, the difference in speed is one of the criteria that could help you decide— whether you prefer slow or fast. If it’s about ease of use, paragliding triumphs over hang gliding. It’s ideal for a pleasant and less intimidating experience for airborne activities. So, if you’re curious if paragliding or hang gliding suits you more, continue reading below.

Is Paragliding and Hang Gliding the Same?

The two aerial sports have numerous similarities but are entirely different. Both are similar in terms of convenience as it is readily available compared to others. In addition, hang gliding and paragliding are motor-free and require being launched from the ground.

Whether you try either, both provide a simple flight experience that does not overly exert the user physically. But do note that you need to wield power to accelerate and propel yourself upwards at the launch.

What Is the Difference Between Hang Gliding and Paragliding?

The difference is mainly the wing shape, position, and speed. Although both air sports seem similar, hang gliding and paragliding have a lot of differences that separate each other. However, the main dissimilarity between the two is ‘control.’

For hang gliders, it’s typically controlled by the pilot. Meanwhile, paragliders rely on air pressure to maintain their shape.

According to recent statistics, paragliding has a higher fatality rate than hang gliding. The mishaps are due to the possibility of paragliders collapsing while in the air. Here are other dangers paragliding could encounter.

Which Is Easier to Learn – Paragliding or Hang Gliding?

Paragliding is easier to learn than hang gliding due to its more relaxed nature. It takes about (10) ten to (15) fifteen days to learn the sport and eventually paraglide alone. However, the duration could be longer depending on the user’s comfort level.

On the other hand, hang gliding takes (3) three to (6) six months to learn. But, it’s possible to shorten this depending on your capability and determination. For example, if you enroll yourself in a hang-gliding school, it will take approximately (5) five to (10) ten lessons.

Depending on your views on what’s fun, you could either go for hang gliding or paragliding. So, opt for hang gliding if you’re more into the thrill, speed, and aerial tricks. Furthermore, it’s perfect if you prefer physically demanding spots more!

Meanwhile, paragliding is more natural, relaxing, and best for sightseeing. Moreover, it’s compatible with people who enjoy taking things slow and the peacefulness it brings. So In the end, it all depends on your taste which air sport is more fun. However, it won’t hurt to personally try both and check which experience you prefer the best.

Tandem paragliding and hang gliding support two people— the passenger and the experienced pilot. Although both allow a tandem activity, the two aerial sport differs in many ways. To get you a better rundown on the disparity between the two sports, you need to know the following:

A hang glider or paraglider are both unpowered gear designed to carry a single user. Although quite similar, a hang glider and a paraglider have a lot of key distinctions:

What Is the Difference Between a Paraglider and a Hang Glider?

Other than the key distinctions between paragliding and hang gliding, other factors set them apart. See below for a summary of their key differences:

Both flying sports have pros and cons that may affect your views in choosing between the two. In addition, aerial sports are often unpredictable because of the weather, so choose which equipment and sport you are most comfortable with.

What Advantage Does Paragliding Have Over Hang Gliding?

The first advantage of paragliding is appealing to beginners— it’s easier to learn than hang gliding. Other than its digestible lessons, there are other advantages to paragliding, such as:

Is Paragliding or Hang Gliding Better?

In weighing the critical features of each aerial sport— it’s safe to say that paragliding can be a better choice. But in the end, if we’re talking about which is the easiest between the two for beginners, paragliding wins by a landslide.

However, if we look at the thrill factor and speed, hang gliding triumphs over paragliding. Especially if you’re the type who wants to eventually learn a few aerobatics tricks in your venture for aerial sports!

Should I Hang Glide or Paraglide?

Ultimately, choosing to hang glide or paraglide is a matter of your preference and level of comfort. Based on the information listed above, many factors must be considered when choosing between the two. If you still can’t decide in the end, experience is the best way to truly figure out which suits you the best.

So why not try paragliding first, as it’s easier to learn. Once you cross that off your list, then try to challenge hang gliding. By the end of the two experiences, you can decide for sure which aerial sport works well for you. 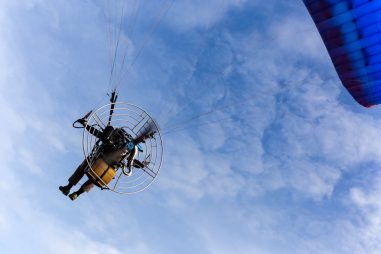 How Dangerous Is Paragliding (Can You Die From It)?