What Is the Meaning of Windsurfing (and Is It Still a Thing)?

Windsurfing is a surface water sport that combines the elements of surfing and sailing. The sailor stands on a board similar to a surfboard powered by a sail. The sail is connected to the longboard by a rotating universal joint at the center of the board. The speed and direction of the sailing rig are controlled by adjusting the sail angle against the wind and adjusting the sailor's position. Windsurfing has made a comeback from the doldrums (pun intended) starting from the late 1990s to the early 2000s and is very much a thing. The revival has been driven by a new wave of windsurfers. Thanks to innovations and sailor-friendly equipment are attracting a new generation of windsurfers.

Is Windsurfing Dead or Still Popular?

Windsurfing is very much alive and sailing. Although there was a lull in the sport’s development and popularity due to growing pains, it has gained new enthusiasts in the last decade.

The standardization of equipment and competition has renewed interest in the sport. The sport’s recent popularity can be traced to recent innovations like “foiling,” re-invention, and the emergence of new water sports such as kitesurfing.

How Many Windsurfers Are There in the World?

Rejuvenation of the sport in the last decade has seen a dramatic increase in windsurfing athletes. From a low of around 200,000 participants in the early 2000s, it reached a peak of 1.77 million in 2015 in the United States alone. As of 2019, there were 1.41 million known windsurfers in the US. No data was available for 2020 due to the pandemic.

It is safe to say that the same trend goes for the rest of the windsurfing world. Again, the data is incomplete due to the COVID-19 pandemic that has limited travel all over the world. There is also some overlap with similar water sports, such as surfing and kiteboarding, with some sailors rotating or alternating from one sport to the other.

When Was Windsurfing Most Popular?

Aside from its initial heyday during the ’70s and early ’80s, the 2010s has been the most popular time for Windsurfing. This popularity is due to the development of materials and technologies for the board and sail. This has made it easier for those who want to participate in the sport.

Of course, the impact of social media on the sport’s popularity cannot be discounted. Windsurfing’s stars are regularly on different media and continue to drive interest in the sport. As a result, more sponsors are getting in on the action and boosts more attention to Windsurfing.

Is Windsurfing Making a Comeback?

Not only is Windsurfing making a comeback, but it is also making dramatic progress as well. Advances in technology have made it more accessible to beginners who are driving its renaissance. The new boards and sails have made it easier for newbies to learn the sport and get them hooked long-term. In fact, the majority of new amateur competitors in the sport are in their late teens.

When kitesurfing came along, a lot of windsurfers shifted to it as it is easier to learn. Today, those same people have come back to Windsurfing for the opposite reason. They crave the challenge of mastering something that has eluded them before. The newer equipment has allowed them to do something they were unable to do before. Newly invented moves, variations of the old moves, etc., have added to its appeal.

Where Is Windsurfing Most Popular?

Windsurfing is famous throughout the world, although the major competitions have the most participants due to its ideal conditions for the sport. Some conditions to be considered as a windsurfing mecca are:

With the following defined criteria, the following places are destinations of choice for the windsurfing crowd in no particular order:

What Is the Aim of Windsurfing?

There are several windsurfing competitions with distinct rules and objectives. Professionals competing in today’s windsurfing contests have course racing, slalom, freestyle, and wave sailing. Competitions are held throughout the world depending on the season. The matches are broadly broken down into three categories as follows:

Windsurfing is a type of sailing that uses the wind to power the board on which the windsurfer stands. Actually, the windsurfers call themselves sailors rather than surfers. It is there that the similarity ends.  In sailing, the sail is attached to a boat by combining a mast, spars, and ropes. In Windsurfing, the sail is connected to the board only by a mast with a universal joint.

The sailors use the sail to steer the board and use the wind to power the whole kit. In sailing, the sail is not used to steer the boat; and instead, it uses a rudder to do the steering. The windsurfer also uses the whole kit to perform stunts and acrobatics, something you cannot do with a boat.

How Does a Windsurf Sail Work?

A windsurf sail has a two-fold purpose. One is to “catch” the wind and use it to propel the boat forward. Second, it is used to steer the windsurfing board in the direction you want to go. This is how you steer the board using the sail:

What Is Freeride Windsurfing?

Freeriding is what recreational Windsurfing is all about. Freeriding is basically just sailing back and forth for fun and enjoyment. This is what the majority of windsurfers do, just having fun, doing a few moves, and generally just enjoying the ride.

Freeride windsurfing is not a competition category. This is the purest form of Windsurfing for the amateurs among us.

Is Windsurfing a Sport?

By definition, a sport is an athletic activity requiring skill and physical competence that is played according to a set of rules. It can be done for one’s enjoyment or as an occupation. By this definition, Windsurfing is definitely a sport.

It requires skill and certainly some physical prowess to participate in this activity. It has found its way into the Olympics. It is practiced by more and more athletes around the world who not only find enjoyment in it but also make a decent living from doing it.

Is Windsurfing an Extreme Sport?

Windsurfing is considered to be an extreme sport. With the development of new equipment, new moves can be attempted. “Foiling,” for one, is a relatively new addition to the sport. Windsurf foiling is basically adding “foils” or fins to the bottom of your board. This will give a lift to your board under the right conditions, and you will “fly” across the water.

The wave competition produces the most thrilling spectator sport. Jumps, rotations, wave rides, loops, and any combination of these moves give the audiences a thrill-a-minute experience.

Is Windsurfing an Olympic Sport?

Windsurfing started as an Olympic demonstration sport in 1984. Since then, it has been a part of every Olympic Games. In 1992, the competition for men and women was first staged as separate events. It was almost replaced by kitesurfing in the 2016 Games but was reinstated to the relief of windsurfing aficionados but to the chagrin of the kitesurfing enthusiasts.

The 2020 Olympic Games windsurfing competition will use “One Design” kits, the standardized board, and sail to level the playing field. The Tokyo Olympics will use the RS:X class of board and sail. Even in low to moderate wind speeds, this class will allow good performance in a wide variety of weather conditions. The board measures 2.86 meters in length and 0.93 meters wide. The sail will feature a 9.5 square-meter sail for men and 8.5 square meters for women. The field of 350 sailors will be divided equally between men and women.

Who Is the Best Windsurfer in the World?

The “best” windsurfer in the world is open to debate. It is better to appreciate the different legends of the sport and their contributions to its growth and popularity. Notable figures who have significantly advanced and influenced the sport are:

When Was the Windsurfer Invented?

The Polynesians were using sailboards long before it was thought up in Europe and the US. A type of sailboard was invented in 1958 in the UK. A different kind of sailboard was being used in the US at almost the same time.

The modern windsurfing kit as we know it today was developed in the 1960s. Advances in technology and materials helped accelerate the sport’s growth by providing its enthusiasts with affordable and easier-to-use equipment. Today, innovations to the sport are still being added, contributing to its revival.

The Polynesians have long been known to use a rudimentary sailboard with upright sails. However, it was a long way from the modern sailboards of today. An Englishman, Peter Chilvers, had created the first windsurfer in Hayling Island in the UK when he was 12 years old. A patent infringement suit in the UK upheld one of the litigant’s contentions that it was actually Chilvers who invented the sailboard.

Newman Darby, an American, is also credited with the invention of the windsurfer together with his wife, Naomi, who sewed the sail. However, it wasn’t until the 1960’s that they started marketing the sailboard. By that time, two other persons were being recognized as the inventors. Jim Drake and Hoyle Schweitzer improved on Darby’s design and filed a patent for the sailboard. They were granted a patent in 1970. Darby did not file a patent for his design but is now being acknowledged as the inventor.

Why Is Windsurfing Still the Best Sport?

Like any other sport, Windsurfing as a leisure activity helps you maintain a level of physical fitness. You utilize your whole body when sailing, so you reap its benefits in full. Windsurfing burns 1000 calories per hour, according to researchers. The exercise also builds your cardiovascular endurance leading to reduced hypertension and heart failure occurrences.

Aside from the physical benefits, physical activities also lessen mental stress. Gliding through the water under the sun allows you to focus only on the task at hand. This forces your mind to rid itself of any extraneous thoughts except the immediate activity. Connecting with similar-minded sports buffs expands your social life as well. Last but not least, having a good night’s sleep after a day of tiring Windsurfing gets you energized for the work week ahead as you look forward to another weekend of sailing. How Do You Windsurf (Standing, Planing, Steering, and Turning?) 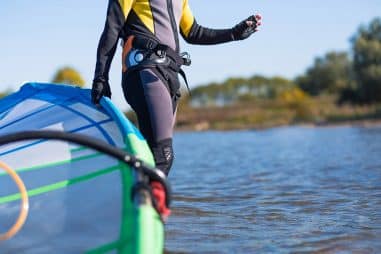 How Do You Set Up a Windsurfer (and What About Maintenance and Transport)? What Is Foiling in Windsurfing (and Is It Hard and Dangerous)? 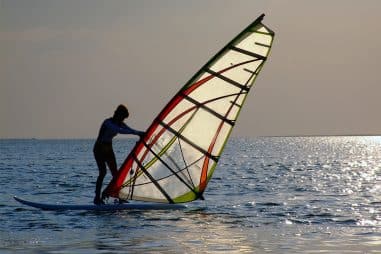 How Do I Start Windsurfing (and Is It Dangerous and Hard)? What Equipment Is Needed for Windsurfing (and How Much Is a Windsurfer)? How Much Wind Do You Need for Windsurfing (and How Fast Can You Go)?