What Wind Speed Is Needed for Kitesurfing (and Can You Kitesurf in the Winter Months)?

You need at least 6 miles per hour to start riding and to stay upwind. But you also need to consider your weight and the size and type of your kite to successfully launch your kite. It’s possible to kitesurf even in the winter months. In fact, some even prefer the cold as it adds another layer of fun to the activity. Kitesurfing is slowly gaining the attention of thrill-seekers, even those who live far from bodies of water. It is an enjoyable (albeit high-risk) adventure that you can do almost the whole year-round.

What Wind Speed is Good for Kitesurfing?

The minimum wind speed to get you riding should be around 6 miles per hour. However, if you think that the wind speed is the only thing you need to launch your kite then you are wrong.

There are several other factors that come into play including your weight and the size and type of your kite.

What is Ideal Wind Speed for Kitesurfing?

The ideal wind speed for kitesurfing varies from rider to rider. The weight of the rider is one aspect that should be considered when kite surfing. Riders who are lighter can ride in less wind.

On the other hand, heavy riders that are over 200 pounds may need at least 15 miles per hour to stay upwind. Another aspect that greatly affects one’s ideal wind speed is the size and type of kites. Even if all the riders are of the same weight, if they have different size kites then they will all take off at different wind speeds.

How Many Knots Do You Need to Kitesurf?

However, you still need to take your weight into consideration as this has an effect on whether you need less or more wind to help you launch.

Can You Kitesurf in 10 Knots?

You can definitely kitesurf in 10 knots. In fact, this speed is ideal for an average rider to start flying their kite. 10 knots (12 miles per hour or 22 kilometers per hour) is just the right speed, especially for beginners.

Always bear in mind that if the wind is not strong enough to hold up your kite for a long time, it’s best to cancel your kitesurfing activity just to be on the safe side.

Can You Kitesurf in the Rain?

Although the rain can have its effects on the wind, you can still definitely kitesurf even when it’s raining. Riding under the rain requires you to concentrate more and to be more attentive which also makes the activity a skill-booster.

You still have to very aware of the wind. If it gets too strong, take it as a sign to pack up your kite and go home. It also helps to have basic knowledge of the different kinds of clouds to help you gauge the approaching weather.

Where Can You Go Kitesurfing in January?

January is exciting since it is the start of the new year but in some parts of the world, the weather is bleak and dreary. If you want to start the year with some fun in the sun so you can try kitesurfing in January, here are some of the places that would be perfect for you.

Where Can You Kitesurf in February?

If you want to switch it up a little and take your loved one on a kitesurfing trip instead of a fancy dinner, here are some places you can go to in February.

Where Can You Go Kitesurfing in March?

For many countries, especially those in the far east, summer starts in March so if you are from the North who wants some sun, here are the places that are great for kitesurfing in March.

Where Can You Kitesurf in April?

If you want to check out other kitesurfing spots in April, here are some of the best during that time of year.

Where Can You Go Kitesurfing in October?

If you want to fight off that mid-year funk and you’d rather enter the waves than you office, then here are some sweet spots that you can go to in October.

Where Can You Kitesurf in November?

It’s almost Christmas time but you can’t seem to stop thinking about the waves. Maybe you need another trip to the beach? If the answer is yes, you might want to check out these kitesurfing spots in November.

Can You Kitesurf on a Lake?

Can the lake near you support launching, riding, and landing your kite? If the answer is yes to all three then go ahead and kitesurf on that lake because that means it is large enough to support the activity.

While it’s still more ideal to kitesurf in the ocean and bays, if the lake is large enough and it is far from obstruction like power lines, trees, and buildings, then it is ideal for kitesurfing.

However, it’s still best to only do the activity when there are no boats, kayakers, or jet skiers around the area because it can be hard to avoid them during your ride. How Is a Paramotor Powered (Does It Need Gas)? 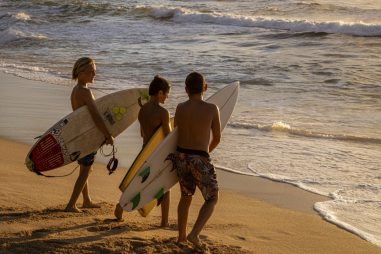 Boogie Boarding vs. Surfing (Which One Is Easiest and Safest) What Is Ski Mountaineering (and How Do I Get Into It)? How Do I Choose the Right Boogie Board (and What Else Do I Need)? Where Can I Launch a Paramotor (Can I Fly Anywhere)?